I started reading the first part of A Song of Ice and Fire this week (which formed the basis of HBO's Game of Thrones.) The entire series spans about 4000 pages, so you can imagine there is quite a lot going on. The story is told from different perspectives, all set at different locations. There are dozens of characters with different story lines, from servants to main characters. I found myself getting lost in all the different family names and relationships, repeatedly rereading section of the book to refresh my memory.

English not being my native language, the integrated dictionary iOS provides is a life saver. Especially with these kind of books, where the story is set somewhere in the past. But this modern dictionary is limited. Words like 'freeriders' and 'maester' are nowhere to be found, not even on Wikipedia or Google. Wouldn't it be great if the ePub format would allow the publisher to include these kind of definitions?

But of course, it shouldn't stop there. These kind of books often include maps of these Far Lands, family trees of the various Houses. This kind of data should be available to the reader within a few taps of the finger. Not only words, but characters and locations could be explained by the reading device. However, this data is not static. As the story unfolds, the meta data evolves. Mysteries are solved, wars unleash, relationships shatter. 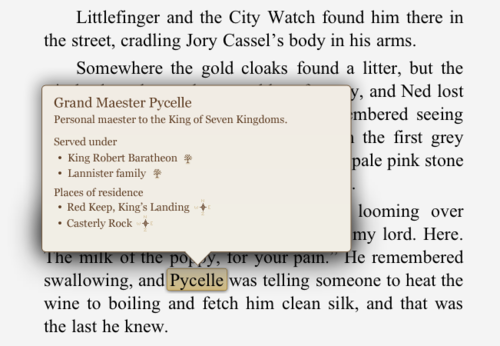 This metadata would allow readers to dig into relations between characters and really submerge into the world as described by the author, providing another layer of intricacies for the reader.

This article was published by Joël Cox on 2011-11-16. Continue reading about #product #design